Celebrities That Reshaped Their Careers With Cosmetic Dentistry!

When you think of most celebrities, you think of their great big smiles; perfectly aligned white teeth, a cheeky grin that captivates you time and time again. So, it might be shocking to find out, that most of these superstars weren’t born with the great smile. Celebrities actually visit cosmetic dentists during their rise to stardom to change the appearance and appeal.

Some unbelievable before and after photos of your favorite celebrities’ dental work jobs. The star of “Mission Impossible” series, “Top Gun”, “Minority Report”, etc. began his career with discolored, misaligned teeth. To become Hollywood megastar that he is today, Cruise undertook several cosmetic dentistry services; including teeth whitening and straightening.  The end result was a smile that truly made your heart throb. If you’ve ever seen the British TV show “The X Factor”, you’ve probably seen Cheryl Cole. The beautiful smile of Cheryl Cole that takes our breath away wasn’t always in existence. When she started her career, she had notably longer and pointed teeth. Since then; Cheryl has visited cosmetic dentists, who have managed to shape her teeth and eliminate the gaps to give us the end result we see today! 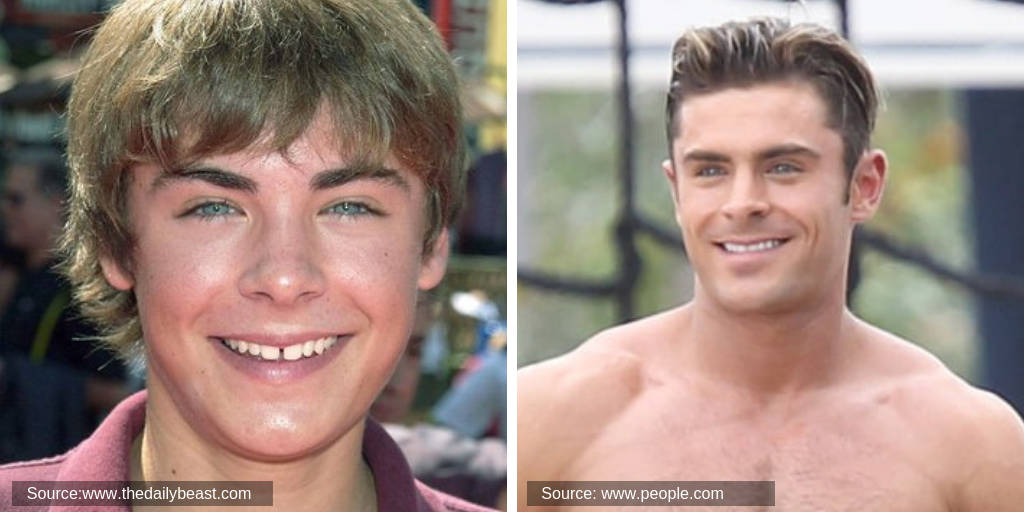 When you think of the “High School Musical” series or of “Bad Neighbours” you think of the X-Disney Channel heartthrob. His smile, however, didn’t help him win the hearts of teenage girls. Efron sought out cosmetic dentists to help him whiten and fix those uneven teeth. This helped him attain a masculine smile that suits his strong facial features. The actress and pop vocalist was a Disney child star, who acted as a teen icon for many years. During this time, however, she had less-than-perfect teeth, but she didn’t mind as it worked in showcasing her youthful, innocence. In 2009, Hilary chipped her tooth on a microphone while performing and she took this opportunity to upgrade to a full set of veneers! Her smiles’ never looked better. Nicolas Cage, an actor you love or hate! Cage has always been known for his unusual antics and in 1984 he did one the weirdest stunts of all; Cage had two teeth pulled for a role in the movie film “Birdy”. When Cage transitioned to the position of lead, his teeth needed a makeover and he used this chance to get a full set of veneers. Jersey Shore star Nicole Polizzi (AKA Snooki) shot to fame in early 2010! Her beehive-throwback hairdo caught the attention of all teenage girls and became the new fad. Her teeth, however, didn’t share the same fortune. Snooki thus decided to have her crooked teeth straightened and brightened. The result can be seen below. Believe it or not, one of the most handsome stars didn’t have grey hair and a perfect smile throughout his life. In the early days of his career, his Clooney lacked the straight smile; which now defines him. Clooney needed to visit a dentist not only for cosmetic reasons but as a result of teeth grinding during stress. 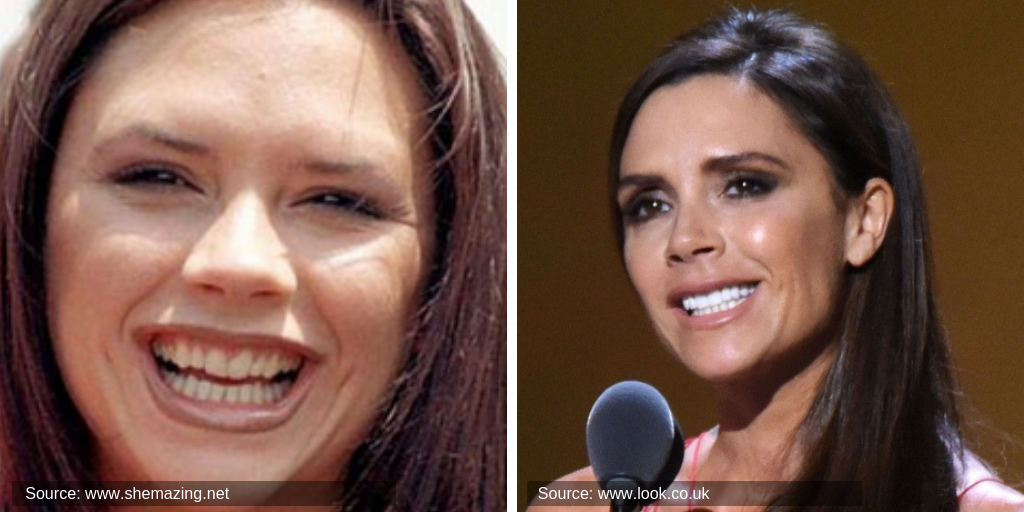 Back in the 90s, Victoria was famous for her association with the Spice Girls. She was best known for her style and fashion sense, but Victoria’s teeth were never in the limelight as there were uneven spacing and wide gaps. As her career progressed, Victoria had her teeth straightened and bonded; giving her the confidence to smile at her fans. During the early days of Miley’s career, she portrayed the character of “Hannah Montana”, and the slightly crooked teeth with a lot of gum showing added to the teen singer’s charm. But as she got older, she updated her teeth to match her new image. She had her teeth whitened, straightened and made fuller (Through removal of gums) to partner her signature tongue-out look. 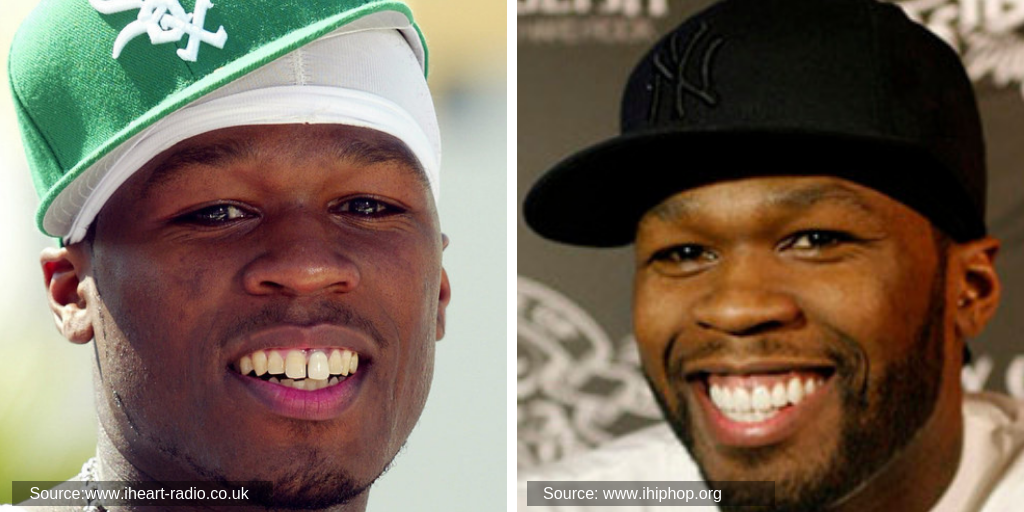 Actor, rapper, entrepreneur, drive-by survivor has been known for roughing it out prior to his stardom.  This is exhibited through 50’s less than perfect smile dawned in the early days. Curtis James Jackson III (AKA 50 Cent) decided to get dental work done after another rapper mocked him for the gap in his teeth. 50 however, retained the longer front teeth to “look like himself” in the mirror.

Cosmetic Dentistry is not just for the Celebrities!

Cosmetic Dentistry is not as expensive as you think! Use our Smile Assesment Camera and perform a check, to know what you need to get done to reshape your life!

Hello! I just wanted to ask if you ever have any issues with hackers? My last blog (wordpress) was hacked and I ended up losing many months of hard work due to no backup. Do you have any methods to protect against hackers?

This wonderful and very well written article reminded me of when I had big problems with teeth, cavities and pain, yellow and ugly teeth, then I found a simple way to rebuild my teeth and gums and get rid of tooth decay. (maybe it will help someone): https://bit.ly/2ZV061N Thanks! Keep doing a great job!

I would say this is one of the best article I've read. You nailed it from beginning to end. To write this you might have worked for research. King regards, Demir Zacho

You ought to be a part of a contest for one of the greatest websites on the web. I'm going to highly recommend this website!

After I originally left a comment I seem to have clicked the -Notify me when new comments are added- checkbox and from now on every time a comment is added I receive four emails with the same comment. There has to be a means you are able to remove me from that service? Kudos!

Hello, its good paragraph on the topic of media print, we all be aware of media is a enormous source of facts.

Hi there! I simply wish to offer you a big thumbs up for your excellent info you have right here on this post. I'll be coming back to your website for more soon.

Reshape Your Career With A Dental Makeover!

Interested in getting a dental makeover? Use Our FREE SMILE ASSESSMENT Camera, to understand what dental requirements you have!
No, I Am Happy With My Smile Get A FREE Check!